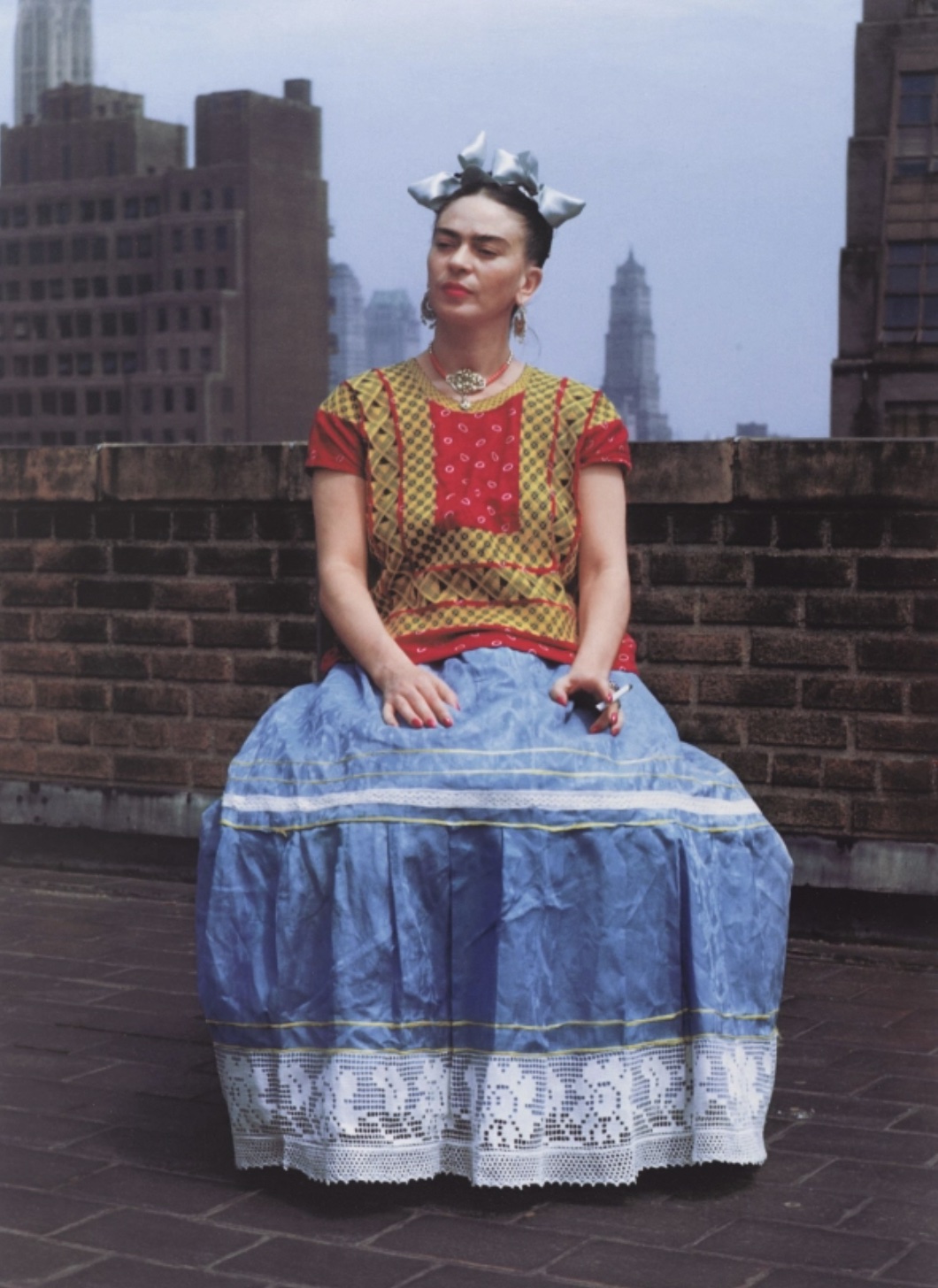 Self-Portrait on the Borderline Between Mexico and the United States: Frida Kahlo’s Artistic Commentary on Biculturalism

Self-Portrait on the Borderline Between Mexico and the United States: Frida Kahlo’s Artistic Commentary on Biculturalism

The idea of roaming a world free of ostracization is a difficult concept for women to realize when they are battling to be accepted by two, polar-opposite cultures.

It is not uncommon to see women lose this battle, rebuffed by individuals from both cultures for being slightly different from them. This idea of struggling for acceptance from two, distinct communities is the result of biculturalism. Biculturalism, an “integration of the competencies and sensitivities associated with two cultures within an individual,” is a strenuous condition for women given that it hinders their ability to navigate two countries without having to feel rejected for not belonging solely to one country and its culture (Psychology). To be bicultural means to have a sense of “ comfort and proficiency with both one's heritage culture and the culture of the country or region in which one has settled” (Schwartz and Unger). That is, bicultural individuals feel comfortable engaging in the customary practices of both cultures due to a deeply-rooted familiarity. It becomes especially difficult for women to establish an identity that incorporates both cultures when they are torn between choosing the two, or when they feel alienated by one culture for partaking in the activities of another culture. Mexican painter Frida Kahlo explored this theme in her art, specifically in “Self-Portrait on the Borderline Between Mexico and the United States,” vividly portraying the byproducts of being a bicultural, married woman in the early 20th century.

Kahlo was born in Mexico City, México as Magdalena Carmen Frieda Kahlo y Calderón on July 6, 1907. Daughter of a German immigrant and Mexican native, Kahlo was bound to experience the tugs of bicultural tensions from the moment she was born. At the age of six, Kahlo was involuntarily hurled into nine months of immobility after contracting polio. Once this unexpected sentence ended, Guillermo— Kahlo’s father— encouraged her to partake in athletic activities (commonly associated with men during this time period) as a way to physically recover from nine months of being bedridden. These activities included soccer, swimming, and wrestling. Numerous historians have argued that Kahlo’s feminist beginnings can be attributed to her father and his liberal remarks.

In 1922, mural communist Diego Rivera was appointed to create a mural by the National Preparatory School— the school Kahlo attended. She became infatuated with him after spending a great amount of time observing him paint, telling her friend that she would one day have “Rivera’s baby” (Biography). Six years later, Kahlo and Rivera reconnected. After a year of starting a romantic relationship, Kahlo and Rivera wed. Kahlo had a difficult marriage plagued by infidelity, miscarriages, and constant uprooting. Throughout their marriage, Rivera’s career would move them across different parts of the world, including San Francisco, New York City, Detroit, Paris, and San Angel, Mexico. Her marriage to Rivera directly expanded and pronounced Kahlo’s familiarity with the issues of biculturalism.

“Self-Portrait on the Borderline Between Mexico and the United States” is a 1932 painting of Kahlo’s that perfectly encompasses the sentiments and choices bicultural women feel required to make when living with two different cultures. The painting below shows Kahlo standing between the United States of America and Mexico. She longs to be in her native land, Mexico— which is portrayed by her traditional clothes and the Mexican flag in her hand — but is restricted by her husband. On the right side, we can see the word “Ford” painted onto industrial tubes, indicating that it was around this time that Kahlo and her husband were living in Detroit, Michigan. Although living in the United States is nothing new to Kahlo, she is struggling to fit into a modern world completely deprived from the Mexican culture she is fondly used to.

However, no matter how much Kahlo might identify with her Mexican roots, these Mexican roots are long enough to make her feel like she belongs to one culture. It is important to remember that she is standing in between both countries, not in one. If we pay close attention to the cement box Kahlo is standing on top of, it says Carmen Rivera. This name was given to her by the American press, who described her as “Rivera's petite wife who sometimes dabbled in paint” (Frida Kahlo). It has also been suggested that Kahlo restrained herself from using “Frida”, a German name, because of the “rise of Nazism” at the time and America’s implications with Germany (Frida Kahlo). Whatever the case could have been, the American media still tied Kahlo to her American culture, effectively preventing her from being monocultural. This problematic matter is further solidified by the wires emerging from the cement box: one is connected to a wire from America, which travels across the borderline and connects with the roots of a white lily in Mexico. She isn’t simply a Mexican native or an American resident— she is both.

“The Two Fridas” is a 1939 painting depicting the inner turmoil that can result from battling biculturalism. In the painting, we see two Kahlos holding hands. The Kahlo on the right is dressed in traditional Tehuana clothing and the Kahlo on the left is wearing modern clothes. These two personalities are the remnants of her relationship with Rivera, who she had just divorced. After years of sticking by Rivera’s side while he flourished in the world of art, Kahlo was left confused as after ignoring her true identity for years, she was left with one that no longer represented who she was. The old her, on the right, lived a healthy life prior to meeting Rivera, hence the closed heart. But after marrying Rivera and being swept over the borderline to America, she was left as a hurt, modern girl with a bleeding heart.

Although biculturalism might be daunting for women, it is important to note that we are the ones who get to decide how we want to be perceived. Frida Kahlo was able to express herself through her paintings by using the difficulties thrown at her and turning them into literal art. She permanently documented her agony as a way to explain the troubles biculturalism had created for her throughout her marriage. Yet, she did not allow the pain to intervene with her ultimate message. Kahlo was able to convey the beauty of being bicultural— of being rich with heritage.

She demonstrated how a woman can exist in two different worlds without having her voice destroyed. Kahlo allowed her life and art to take the path it did, but she made sure to appreciate the fruits it gave her along the way. Kahlo has kindly allowed these fruits to be shared with us today, inspiring us with her resilient individuality.