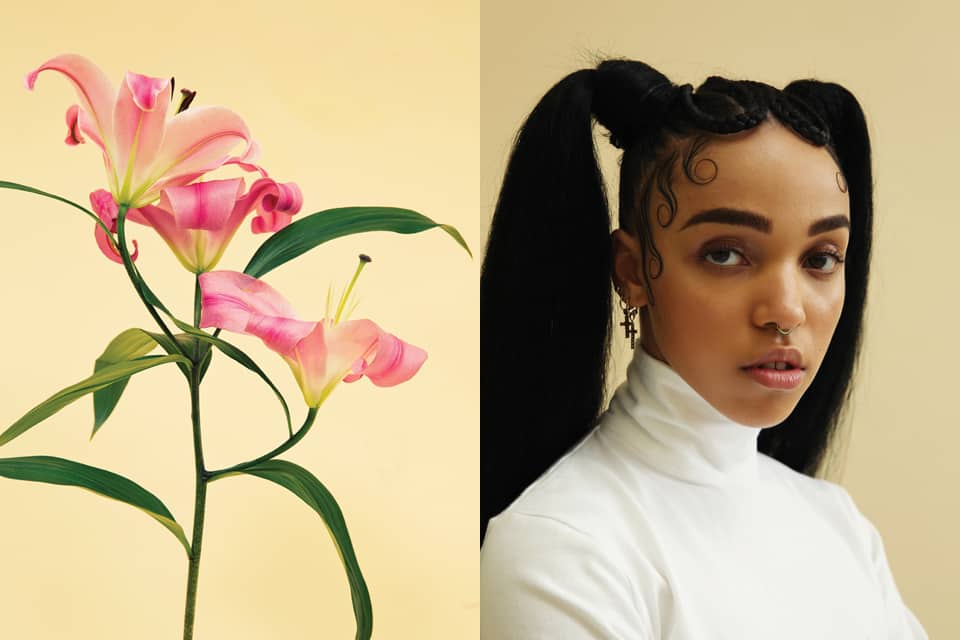 A Woman’s Work: the Strength and Vulnerability of FKA Twigs

A Woman’s Work: the Strength and Vulnerability of FKA Twigs

In light of the release of her most recent mixtape, CAPRISONGS, I have recently spent a  lot of time reflecting on one of my favorite artists, FKA Twigs, and the impact that her music has  had on my self-perception and emotional vulnerability. From her first album, LP1, to her  sensitive yet powerful magnum opus, Magdalene, FKA Twigs, born Tahliah Barnett, has been a  fixture in my life since I was an introverted middle schooler. 7 years later, Twigs has grown significantly, embracing her femininity and her ability to let down her emotional barriers, and  so have I. By exploring her career trajectory and her visual and musical art, I hope to expose the  many lessons that one of my favorite singers has taught me over the years.  Born Tahliah Barnett in the boroughs of Gloucestershire, England, to an English mother  and a Jamaican father, FKA Twigs lived an isolated childhood and quickly found an outlet  through dance. After moving to London to pursue both music and dance, Twigs quickly found  success as a backup dance for popular English artists such as Ed Sheeran, Kylie Minogue, and  Jessie J. Her experience as a backup dancer in Jessie J’s “Price Tag” music video marked a  turning point in both her career and her personal identity. After playing an emotionless  marionette in the video, Twigs decided that she wanted to have more control over her  narrative, reflecting on this experience in a 2014 interview with The Observer, she stated, “Do  you think I want to be dressed up as a puppet? As a doll, waving? No. But I was paying my dues.  I’m sure Jessie had to do rubbish jobs as well before she was where she is now. I was a tiny cog  in her wheel. As I’m sure at some point she was a tiny cog in someone else’s wheel.” This  experience inspired one of the standout songs from her first full length release, LP1, titled  “Video Girl”. The chorus of the song perfectly articulates her dissatisfaction at being reduced to  a small player in a larger game: “The camera on you ain't enough? / You're looking for the all  round good love / So nothing's gonna get in your way / You're gonna get yourself broke one  day”. By the time LP1 was released, its predecessor, EP1 (2012), had already been met with  substantial critical acclaim. Journalists and fans alike were astonished by her ability to fuse  together genres that were otherwise wildly different- her influences ranging from the wild  feminist punk of X-Ray Spex to the crooning jazz of Billie Holiday, to the atmospheric vocals of  Kate Bush.

Originality is something that FKA Twigs certainly holds near and dear to her heart,  frequently expressing disdain for the tendency of listeners to put her into a box due to her  racial identity: “It’s just because I’m mixed race,” she told The Guardian. “When I first released  music and no one knew what I looked like, I would read comments like: ‘I’ve never heard  anything like this before, it’s not in a genre.” From my personal experience, this is exactly what  listening to FKA Twigs feels like- completely original, perhaps even otherworldly. I vividly  remember the first time I ever heard Twigs’s voice. I was 12 years old, listening to an alternative radio station in the backseat of my mother’s car when “Two Weeks”, from LP1 began to play. I  was immediately enamored. While I was not perceptive of the song’s lyrical content, I was  immediately struck by the vulnerability of her voice. She wasn’t just singing some simple, slow,  love song. She was pleading with her lover, her voice desperate and longing. It was an  emotional rawness that I had never heard before. In retrospect, almost 8 years later, the song’s  vulnerability extends much further than her vocal inflection. The song is overtly sexual- an  emotion that women of color, notably Black and Latina women have been borderline  prohibited from expressing since the days of minstrelsy in the early 19th century. Twigs, an Afro Latina woman, has never shyed away from owning her sexuality in subversive ways, using it to  express her deepest darkest, emotions rather than as a spectacle for the male gaze. This is most  glaringly evident in her most critically acclaimed project, what I would argue is her magnum  opus, Magdalene.

In 2017, FKA twigs called off her engagement with actor Robert Pattinson, with whom  she had been in a relationship for about 3 years. For the sake of allowing this to be her  narrative, rather than the story of their relationship, I won’t go into extensive detail, but during  those three years, Twigs experienced a significant amount of physical and emotional hardship.  She was being bombarded with hateful, racist comments from fans of Pattinson, who couldn’t  contain their disgust at his relationship with an Afro-Latina woman, especially one as open and  unapologetic as she. If this emotional turmoil wasn’t enough, Twigs began experiencing health  issues as well- developing fibroid tumors in her uterus- detrimental not only to her ability to  express herself through dance, but also to her perception of her own femininity. Twigs  channeled all of this pain into MAGDALENE, a 9 song album rife with raw emotion that I am  confident everyone can identify with in some way. The album’s title is a biblical reference during her recovery, Twigs did extensive reading about the figure of Mary Magdalene, who she  came to heavily identify with: “I started to read about Mary Magdalene and how amazing she  was; how she was likely to have been Jesus’s best friend, his confidante. She was a herbalist  and a healer, but, you know, her story is written out of the bible and she was ‘a prostitute’. I  found a lot of power in the story of Mary Magdalene; a lot of dignity, a lot of grace, a lot of  inspiration.” Mary Magdalene’s influence is most obvious on the track that bears her name,  which is also the album’s centerpiece. The song begins with an incredibly powerful statement,  which I believe encapsulates the entirety of Twigs’s career: “A woman's work / A woman's  prerogative / A woman's time to embrace / She must put herself first”. Once again, Twigs uses  the track to subvert the public’s notion of female sexuality- Mary Magdalene, who in recent  history has been reduced to a sexual image, now has complete control of her narrative, and is  able to use her body as a symbol of her power and her ability to nurture. In the grand scheme of things, the album explores more than just sexual vulnerability. In “Sad Day,” a track whose  instrumental sounds like a high speed chase with no end in sight, Twigs sings of her desperate  attempts to preserve a fading relationship. “Daybed” is a raw expression of loneliness, as Twigs details the solitude of being bedridden following during her recovery from surgery. The album’s  closer, and the album’s most popular track, “Cellophane”, is a gutting exploration of her  experience with public scrutiny and vicious racism during her relationship with Robert  Pattinson. While throughout the song, Twigs asks her former lover what she did wrong during  their relationship- whether she was enough, whether she “did it for him”. However, in a  powerful lyrical pivot, the last lines of the entire album see Twigs come to the realization that  the doubts she had were not her own. Rather, they were those of the public, the onlookers,  who were “waiting / And hoping” that she wouldn’t be enough for anyone.

MAGDALENE was truly a turning point in FKA Twigs’s career. It’s her most critically  acclaimed project to date (and for good reason). But more than that, it was an outlet for years  and years of emotion that had been clawing and aching for an escape. Her voice carries  generations and generations of trauma that had been rotting in the collective female psyche  since the days of Mary Magdalene. The album’s release truly represented a spiritual release for  FKA Twigs. With all of that out of her system, she was free to pursue whatever she wanted. She  had spoken her peace. She had told the public, the male gaze, and the music industry exactly  what they had done to her, and had refused to allow it to go any further. Having finally  reclaimed her narrative, FKA Twigs used her creative freedom, alongside her newfound spiritual  freedom, to craft her most recent record, CAPRISONGS, in which she is more free than we have  ever seen her before. she states it herself on the song “Meta Angel”: “This is the year of  greatness and being free.” The mixtape is just her having fun- exploring production and pushing  the limits of her vocal ability while continuing to make statements about Black femininity and  sexuality.

The trajectory of FKA Twigs’s career is one for the books, truly. She inspires me to no  end. As a Black woman, who is constantly subjected to the dehumanization of those like her in  the media, it is freeing to have a woman like Twigs, who continues to unapologetically push  boundaries and express her trauma on the world stage for all to listen and watch. She is a  testament to the benefits of emotional intelligence and self-expression- her vulnerability should  be a lesson to women everywhere. Whatever your medium, express and process your  emotions. Let them out, scream them from the rooftops, paint them, sing them, write them,  whatever brings you the most peace. But whatever you do, allow yourself to control your  narrative and find peace within the beauty of your femininity, your intelligence, and your agency.